Add To Your Goodreads TBR

When Liz’s best friend and roommate moved out, Liz’s search for someone new left her scratching her head. If she thought finding potential dates was rough, finding the ideal person to share her home with was even harder.
Apprehensive and spooked to say the least after meeting a few candidates, her hope is renewed when Wyatt knocked on her door. Single, inexperienced and on his own for the first time, he was looking for a fresh start. What Liz didn’t count on is her boyfriend, Chad’s, reaction to the new young, buff, male roommate. Will their relationship survive or will she and Wyatt find themselves navigating the online dating world as they left swipe together? 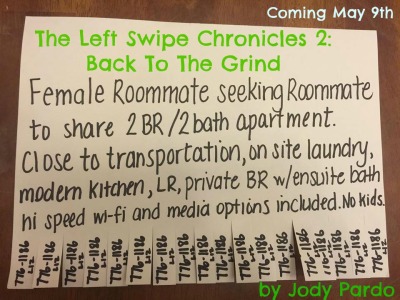 Jody was born and raised in New York City and is an only child of an English professor. After 9/11/2001 and a line of duty injury, she left her role as an EMT with FDNY-EMS for a quieter life. She pursued Bachelor’s degrees at Arizona State University in Molecular Biosciences and English. Her love of books and introduction to the Indie book world led to many wonderful friendships, and the drive to write and publish was ignited. Jody loves to travel and meet new people and has lived in five states and has visited 48 out of 50 US states.
Jody is a single mom to her daughter Ariel Elizabeth and her cat, Bullet.

Left Swipe Chronicles #1 (part of Story of a Kiss Anthology)